The goddess of fire, Pele, is said to enjoy the sweet and tart taste of the ohelo berries. Native Hawaiians are believed to have tossed the berries into the mouth of the 4,090-foot volcano Kilauea, home of the tempestuous deity, to placate her anger. Oral traditions and chants speak of eruptions occurring long before the missionary William Ellis first saw the volcano’s summit, the cinder-and-spatter cone known as Pu`u `Ō `ō, in 1823.

Kilauea is a shield volcano, a type of volcano built primarily from fluid lava flows, rather than repeated explosions. Shield volcanoes spread across a wider area than their more explosive counterparts, sometimes appearing as if a giant warrior laid his shield over the earth, hence its name. The word “Kilauea” means “spewing” or “much spreading” in Hawaiian.

Kilauea is the world’s most active volcano

The world’s most active volcano, Kilauea erupts an average of once every 2½ years. In September of 1977, the volcano tossed rocks and ashes into the air, with fire shooting 350 high and lava flowed towards the city of Kalapana. The volcano’s current eruption, however, began in 1983 and is still ongoing, the largest and longest eruption in recorded history. Lava erupting from the cone continuously flows through a tube system to the sea, resulting in a spectacular display of fire and water. Occasionally, more explosive activity occurs. In March of 2011, lava shot 80 feet into the air, and the floor of the volcano dropped 377 feet in one afternoon. Since 1983, 189 structures have been destroyed.

Although it is estimated that Kilauea first erupted 300,000 to 600,000 years ago, Kilauea is the youngest of the Hawaiian volcanoes. The oldest dated rocks are 23,000 years old, and about 70% of the volcano’s surface is less than 600 years old.

Kilauea is the most visited Volcano

As a shield volcano, Kilauea is a haven for volcanologists, who are able to get a rare, close look at an active volcano, although the study is far from safe. Sulphur dioxide emissions from the summit of the volcano have been increasing since 2008, and explosions remain unpredictable. As part of the Hawaii Volcanoes National Park, Kilauea is a popular tourist attraction. Portions of the park, however, are subject to sudden closures due to volcanic activity. The government posts updates, as well as live feeds of volcanic activity, on the park’s website. With millions of visitors each year, Kilauea is the most visited volcano in the world.

Photo by Cedric Letsch on Unsplash 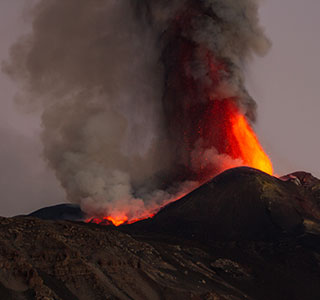 This Legend of a Volcano Erupting 37,000 Years Ago May Be The Oldest Story on Earth

Rare And Fleeting 'Volcanoes' Have Been Erupting at Lake Michigan